This past weekend, the Mercer Junior Rowing program took to the road and traveled to the Saratoga Invite. All in all, there were 75 athletes, 6 parent chaperones and 4 coaches who represented Mercer. The typical spring weather in Saratoga Springs, NY produced chilly and windy conditions on Saturday that resulted in changes to the race schedule. Read below for more details on each squad’s races:

Varsity Boys
The Varsity boys had a very successful weekend up at the Saratoga Springs Invitational and there was great racing across all levels, despite some challenges with the weather and schedule! On Saturday, the Varsity 8 got 2nd in the only 1500m race for Mercer that day. Soon after, all racing was moved to 1000m, and the 2V and 3V both raced in rough and windy conditions. The 2V came just short of beating Greenwich and got 3rd, while the 3V got 6th. Soon after the rest of the racing was cancelled for the day due to weather.

On Sunday, the boys again raced the 8s in the morning, with all 3 boats being in the Champ final. The Varsity and 2V both placed 3rd overall, only losing to Row America Rye and CRI, while the 3V again placed 6th. In the afternoon, the 1V4 placed 3rd, while the 2V4s placed 1st and 2nd and the 3V4 placed 3rd. The lightweight 4 placed 8th in a tough race in the Champ final. Overall, the team raced hard and had a very successful weekend, with many returning with multiple medals! The team now turns its attention to Mid-Atlantics held right here on Mercer Lake May 11-12.

Varsity Girls
Saturday was a DOOZY of a day.  We were able to get in three 1000m races before the weather cancelled the rest of the day.  The girls that did not race on Saturday got a solid workout in at the hotel to stay loose for Sunday’s finals.  On Sunday we were able to see how truly deep we are against some of the best teams in the country.  The results were very good across the board and every girl came home with at least one medal. We will continue to stay hungry and work hard to qualify boats for the Youth National Championships.

Novice Boys
On Saturday, the novice boys were scheduled for the first flight of the Men’s Frosh/Novice Eight. When they arrived at the line, there was an abrupt change and they were forced to race in the second flight. Instead of getting flustered and letting the situation get the better of them, they dug in and won their first race of the weekend.

The following day, the novice boys were scheduled to race in the Men’s Novice Eight and afterwards split up the eight and race two fours in the Men’s Frosh/Novice four. Thankfully, both Sunday races were uneventful and they raced where they were supposed to. In the eight, our guys put up a good fight and pulled a third place. To wrap up the weekend, the guys raced two fours. Despite relative inexperience in the fours, they were both able to win their flights and receive their third medals of the weekend.

Novice Girls
While the novice girls were disappointed not to be able to race in the combined Freshman/Novice 8+ event on Saturday, they had a successful day on Sunday, each person returning home with at least one medal. They raced two Novice 4+s, one of which won their flight, as well as the 8+ in the Novice 8+ event (in which they placed second behind Greenwich, losing by half of the margin that they lost by at the scrimmage a couple weeks ago.) Other highlights included seeing Avengers: Endgame, some very large fluffy dogs, and a miniature horse (see photos below). 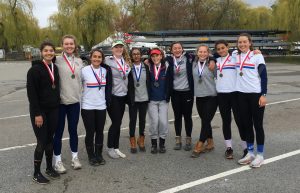 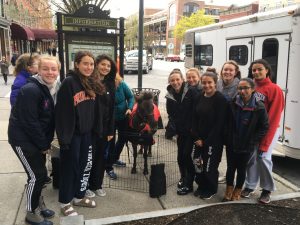