On June 23, 1894, the modern Olympic Games were founded. The International Olympic Day was introduced in 1948 to commemorate this event. It is now celebrated in over 205 countries around the globe. Governor Phil Murphy added New Jersey to the places celebrating the day by declaring June 23, 2020 as Olympic Day for the State of New Jersey.

In his decree, Governor Murphy, recognizes the achievements of the women and men who have trained on Mercer Lake who have represented the United States in the Olympics bringing home medals from every Olympics since 2004. He also recognizes USRowing, the Princeton National Rowing Association (PNRA) and the Caspersen Rowing Center for their roles in preparing the Olympic and National Rowing Team athletes.
Governor Murphy pointed out the challenges that the COVID-19 pandemic has created and the importance of promoting physical health in these times. As the State of New Jersey continues to open up with individual rowing programs to begin this week, the Governor has declared June 23 to promote 24 hours of digital global exercise.

Mercer County has a long history with rowing and our nation’s Rowing Teams. More Olympic Rowing Team Trials have been held in Mercer County than any other place in the United States. This includes the now famous 1936 Olympic Rowing Team Trials when the University of Washington “Boys in the Boat” earning their right to represent the USA at the Berlin Olympics. The 2004 Men’s Gold medal 8+ trained in Mercer County. The 2008, 2012 and 2016 Women’s Gold medal 8+ trained on Mercer Lake. The Caspersen Rowing Center is also playing a key role as the team prepares for the postponed 2020 Tokyo Olympic Games which are now scheduled for the summer of 2021.

To produce Olympians, it takes a team that goes beyond the athletes that will be at the Games. For those training at the Caspersen Rowing Center, this team includes the local community, especially those who have contributed to the team’s success by opening up their homes, providing employment opportunities and otherwise supported the athletes. This also includes Mercer County and the Mercer County Park Commission. Mercer Lake provides one of the top rowing venues in the country.

PNRA’s mission is to provide an opportunity for athletes of all ages, talents and backgrounds have the opportunity to develop this rowing abilities to their highest potential. For more information on PNRA and our programs, please visit our website at www.rowpnra.org. 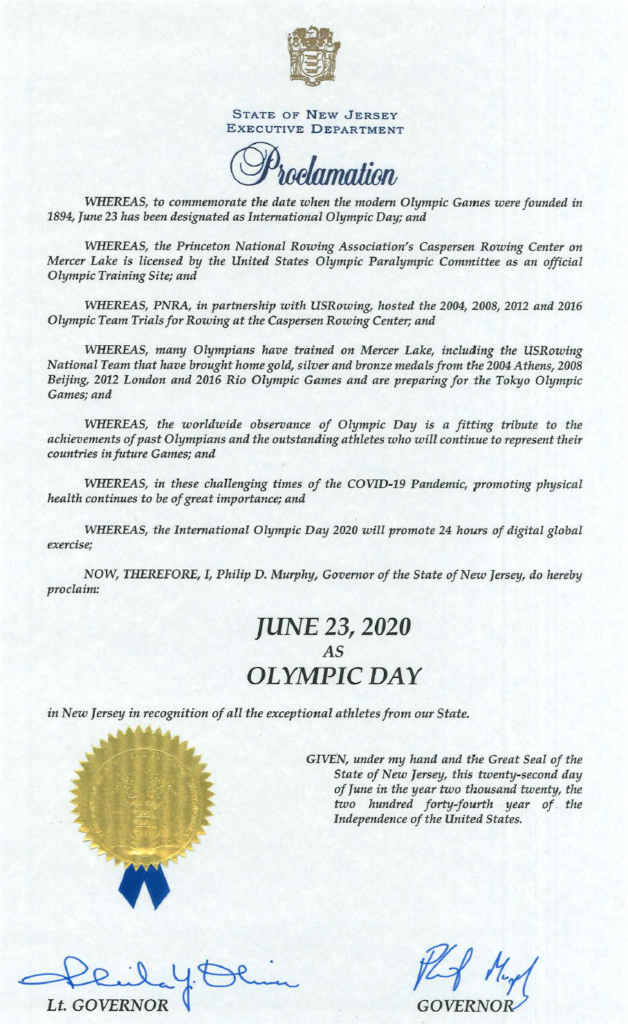